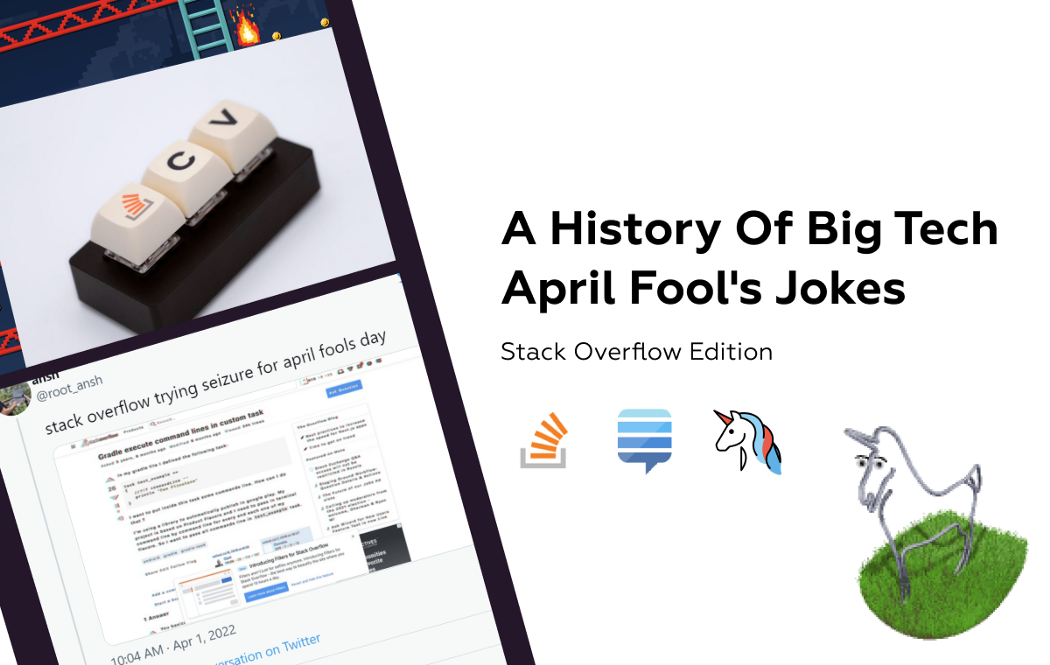 This year, Stack Overflow is really messing with its users. We enjoy a puny joke, but not a stress & eye pain inducing feature with a less than friendly turn off toggle. The platform is the go-to site for everyone with coding questions so adding to this kind of pressure is the last thing anyone desired.

A range of themes were added to the site that changed the UI in not exactly UX friendly ways. An uncanny Armageddon of filters were some hurt your brain while others made you wonder why they are not the default.

A truly worth it product

In 2021, Stack Overflow introduced a new ‘product’ called The Key, a gadget designed from the ground up to make copying code from Stack Overflow quick, painless, and enjoyable.

This was a paywall feature where users would have to purchase a key in order to copy and paste code snippets from Stack Overflow. The Key was an instant hit with developers, who loved the convenience and ease of use it provided.

Obviously it was a joke that preyed on developers for the widespread copy & paste & understand later mentality, the website showcased a countdown of 3 or 5 free CTRL Cs before being forced to buy the Key, fortunately it could be turned off and ignored in the settings.

Due to the global health situation started in 2020 Stack Overflow didn’t officially release and promote a jest, although they introduced the brand new Ultra Dark Mode following the universal dark mode trend.

Developers went crazy for it. Stack Overflow’s dark mode is so black that it renders the site unusable in anything other than a full-black environment.

I usually make sure to turn on dark mode on every app that supports it, and even go the distance to implement it in my own apps but for some reason I never turned it on in SOF, I guess it’s because I always forget to sign in 😅.

Wait a minute Doc, are you telling me you built a time machine out of Stack Overflow?

2019 marked the 30th anniversary of the World Wide Web, and they were lamenting the fact that Stack Exchange sites have only been a third of that history. What would the world be like if Stack Exchange had launched in the year 1998?

So they unveiled a new Time Machine feature that allows you to experience Stack Exchange before it’s time, removing the need for you to imagine it.

If you don’t speed duck you won’t understand

A cutesy, lil duck appears on the bottom of the screen and asks if you are in need for help, what would you do? Click it of course! Stack Overflow introduced Quack Overflow in 2018 as non AI-powered ‘chatbot’ that provides help for developers.

It wasn’t exactly helpful since for any question it simply quacked, quite annoyingly in fact.

The idea was programming slang since according to Wikipedia:

The name is a reference to a story in the book The Pragmatic Programmer in which a programmer would carry around a rubber duck and debug their code by forcing themselves to explain it, line-by-line, to the duck.

In 2017, Stack Overflow decided that they needed to take their security features up a notch. So they introduced Dance Dance Authentication, a new way to log in to your favorite developer tool.

This required users to dance in order to log in, and the more complicated the dance, the more secure your account would be. Needless to say, this feature was the year’s greatest showcase.

Unfortunately this mean of authentication was rolled back due to the dangers of dancing and getting publicly reprimanded for horrendous dance moves, therefore the DDA protocol remains an unfulfilled dream.

Donkey Kong with unicorns, and rainbow lasers, oh yeah and Jon Skeet (the C# legend, who worked on SOF in it’s infancy and now is a Senior Dev at Google).

The goal of the game is to help the unicorn reach the top of the tower, while avoiding the obstacles along the way. And if that’s not enough, Jon Skeet makes an appearance as the main playable character.

While I was researching for this article I discovered a crypto metaverse project with the same name, whether that’s a coincidence or not we can still admit that SOF ideas were way ahead of their time.

An easter egg like no other, picture this, you make an April Fool’s joke so bad that it backfires as a DDOS on the SOF systems and decreases the sites performance so bad people remember the event years down the line.

You could hatch a ‘site’ and evolve it through multiple phases while gaining more & more traffic, although the mechanics and concepts were cool due to the large amount of interest it generated it caused multiple crashes on highly visited websites.

As I progress through older iterations of April Fools pranks I found less information so I apologize as they may lack content.

The future of currencies

Unicoins are a fictional monetary unit that can only be used in unicorn-populated areas, according to Stack Exchange on April Fools Day 2014.

All objects acquired are currently in limbo, meaning they are part of a massive limbo game.

On April 2nd, Unicorntopia hosts a limbo game with hats, unicoins, and prizes all day. Unfortunately, there are no accountant unicorns in Unicorntopia, so we can’t provide you a receipt of what you have paid for with unicoins.

If Unicoins happened today most likely they would have been a full fledged cryptocurrency and 10x in seconds, to the unicorn mooooon.

The dreaded iframe of doom, a small chat window that follows you everywhere and tries to ‘help’. It appears to be a strategy for perplexing newcomers and making them feel uncomfortable.

It’s important to note that the chatbot is not powered by artificial intelligence, which means it won’t get smarter and smarter over time. So be sure to ask it any question you have about Stack Overflow — you will be disappointed.

Another unicorn themed pun, Clippy is a knockoff on the important piece of internet history, the Microsoft Clip helper back in the day but with a unicorn shaped body. It would react to your actions and make your day better.

There are 3 more SOF April Fool’s jokes left I couldn’t cover in this article due to time constraints and difficulty of finding information but I will try to add them later.

If you are not a developer but somehow decide to start learning, do not, and I repeat do not start your career on 1st of April or you’ll be undoubtedly put off by some ingenious prank.